The Tree of Ought — A (Cause) Prioritization Framework

Imagine a couple that tries to make a decision about how to set the table at their wedding. They spend all their time trying to work out this difficult decision, making lists and drawings, and asking Google and friends for advice. Yet underneath their thoughts pertaining to the wedding table, a deeper doubt is lingering in their minds: whether they really want to marry each other in the first place. Unfortunately, they have not spent sufficient time contemplating this more fundamental question, and yet what occupies their attention is still the wedding table.

This is clearly unreasonable. Whether it makes sense to spend time on setting the wedding table depends on whether the wedding is sensible in the first place, and therefore the latter is clearly the most important question to contemplate and answer first. Two weeks after the wedding, a divorce is filed. It was all a waste, one that deeper reflection could have prevented.

This example may seem a little weird, yet I think it captures what most of us do most of the time to a striking extent. We all spend significant amounts of energy on planning and executing ill-considered “weddings.” Rather than considering the fundamental questions whose answers determine the sensibility of more specific tasks, we get caught up in ill-considered specific tasks that happen to feel important or interesting.

This is hardly a great mystery when considered from an evolutionary perspective: doing whatever felt most interesting at any given time probably made a lot of sense in our ancestral environment, and no doubt still does much of the time — ignoring every moderately interesting thing that jumps into consciousness is not a recipe for success in today’s world either. The key is balance, of course, yet I believe we are entirely out of balance for the most part, unfortunately. Too often, our focus is guided by a sense of “uh, this seems interesting” — crudely speaking, a dopamine hit — rather than pre-frontally guided considerations about what objectives that are the most reasonable to pursue. When it comes to what we should be doing, we have a huge unrecognized “uh, this seems interesting”-bias, a bias that makes us lose touch with the importance of thinking hierarchically about what we should be doing.

This is what the “tree of ought” illustrated below is all about. It is a framework for making decisions that emphasizes first things first, while highlighting that “first things first” is best thought of in hierarchical terms.

At the bottom of this tree we have our fundamental values upon which everything else rests and depends — the root and stem of the tree, one could say. From this, something slightly more specific follows, namely the causes we should pursue given our values, the branches of the tree. Finally, on these branches, we find something more specific still, namely interventions that enable us to attain success in our cause area — the leaves of the tree, if you will.

One could of course construct this hierarchical tree with any number of levels, but I find this three-level “value—cause—intervention” division useful, at least for starters. As one moves on, for instance to specific interventions, the tree will keep on getting divided further, as it will then again be useful to think in hierarchical terms. For any specific goal to be achieved, it will always be the case that some tasks and questions are of a more fundamental character than others, and hence more important to solve first.

An illustration of this three-level tree might look like this (there can obviously be any number of causes): 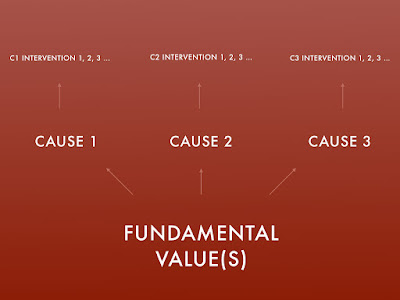 So, at the most general level, this “tree of ought” asks us to consider three questions, in the following order:

1) What are our fundamental values? (Phrased in realist terms: what matters?)

2) What specific causes should we pursue given our fundamental values?

3) What interventions should we pursue given our specific causes?

Hence, the tree of ought suggests a rather counter-intuitive idea that does not seem shared by many, namely that contemplating fundamental values, i.e. Question One, should be our first priority. I think this is largely correct, at least if we do not have a highly qualified answer in place already. Our fundamental values can fairly be thought of as the point of departure that determines our forward direction, and if we take off in just a slightly sub-optimal direction and keep on moving, we might well end up far away from where we should ideally have gone. In other words, being a little wrong about fundamentals can easily lead us to being extremely wrong at the level of the specifics, which is why it is worth spending a lot of resources on being extremely well-considered about the fundamentals.

So contrary to what we may naively assume, the tree of ought suggests that the question concerning fundamental values is not an irrelevant, purely theoretical question that prevents us from doing something useful. Rather, it is the question that determines what is useful in the first place. And answering it is far from trivial.